One of the happiest, most effective INTJ roles is the detective, so I thought I’d share some of my detecting work here.

A good detective first detects, then constructs a model that accounts for their perceptions, and then refines the model as they do more detecting. This is a perception-judgment loop.

As my first example, here is some detective work I’m doing. This is a model I’m working on that places depression as some product of inflammation, and positions it within other factors like an “exertion->sleep-quality->depressive outcome” chain (click/tap/blorb for large version): 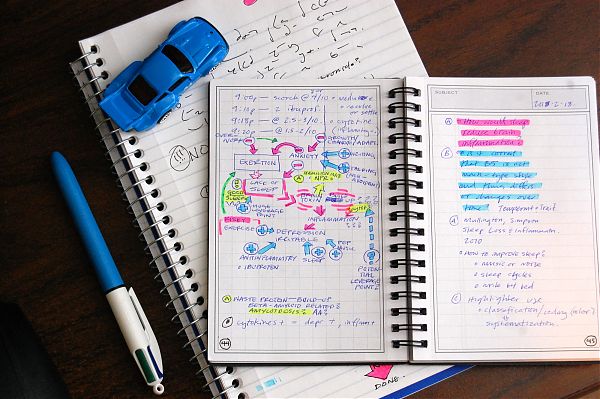 This really needs an upgrade both in graphical quality and in communication effectiveness, but it was exciting to capture the model on paper. I wrote it just after I observed that anti-inflammatory medications could get me out of the depressed zone very fast. This was a big surprise to me. Add in some other ingredients like some pull-ups, upbeat music, and maybe a bit of food or caffeine, and the outcome was just as good as it would have been had I taken a nap (naps were my previous go-to resolution for the depressed state and they still work very well). This was great news for me because I can’t always sleep on command, especially not when I have to wrap up a big project, or do some other stressful thing.

I could go on for days about depression, but so far, as far as I can tell from my measurements, or my detection-and-modeling process, it’s less of an “illness” and more of a symptom. It’s a necessary element in the human system in the same way that physical pain is necessary when you put your hand in a blender. While the pain is a bummer, you can learn a lot of helpful things from it, and maybe the pain quickly saves you from further complications. So this is how I describe overcoming depression: I have conquered depression not by eliminating it, but by reducing it to a non-chronic state and increasing my ability to detect the symptoms, leverage a model, and overcome the pain in a short period of time.

As a second example, here is a model I developed for using my time at the public library for maximum leverage (click/tap/ think in Russian for large version): 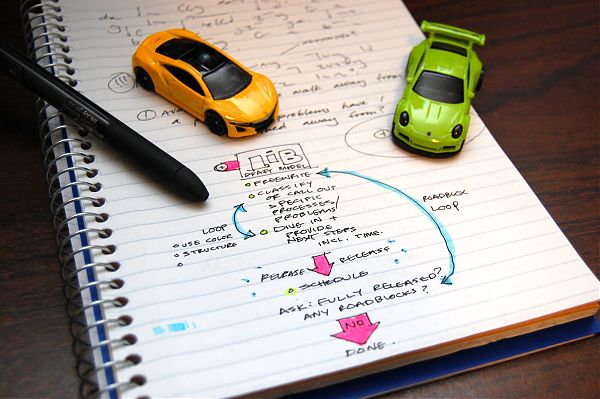 This model is simpler, still requires more refinement, but captures the essence of what’s working for me when I visit the library. I really enjoy the library environment and I try to walk over there at least a few times a week. As I reflected on this model today, I came up with a new clue and potential leverage point, which I’m excited to try.

The model as drawn here captures two loops, one meta-loop where I write freely about my problems to unlock detective mode, which leads to motivation and courage-to-work, and an inner loop where I classify or call out my problems as I write about them (sometimes simply assigning them a number and a highlighter color), then find a different part of the page or notebook to dive in and write more about the details of each problem and any steps to completion.

A key outcome of this model is a schedule or a plan for my time. (Or heck, let’s just say it in German: Zeitplan, because I like how that word sounds.) I used to sit down and try to schedule things directly, but I found that those things were usually still too big-picture (like the classic: “JUST FINISH THE PROJECT”) and it didn’t help with motivation. Right now, scheduling as an outcome of this detecting-system just makes more psychological sense (it’s easier and more effective) and usually the schedule doesn’t need to be changed as much later.

My modeling meta-model is also being fleshed out:

There’s more to this model to come I’m sure, but I think it is starting to answer the “how do I work with details successfully” INTJ question.

Implications of the Perception-Judgement Loop

Because the “detective loop” requires perception and judgement, it’s a good idea to 1) stay open to new information and 2) conduct experiments (use the executive functions of your brain, not just the perceptive functions).

INTJs sometimes rule too many things out in advance by intuitive perception alone, while committing to too little experimentation. Too much attention to a single intuitive perception can bias the “judge, jury, and executioner” processes, which is not always ideal. You could call this “too much Ni (introverted intuition) and low-quality Ni at that” if you are familiar with the cognitive functions, but for most INTJs the major tip here is to stay mentally open and describe/test your models often.

If you’d like some good examples on the topic of staying mentally open and running experiments, see Clifford Stoll and Richard Feynman, below. Feynman’s book, Surely You’re Joking, Mr. Feynman, is a masterpiece in open-minded thinking.

So: If you’re a detective, like most INTJs are, then detect. If you haven’t (consciously) tried it yet, give it a shot. Make observations and start building your own models for things. If you can get those models on paper, you’ll find that you can enter a model-refinement loop and really come up with something elegant and effective.

I’d love to hear about your models, too—email’s in the sidebar.

Here are some of my favorite detectives, both fictional and non:

Finally, I placed some toy cars in the photos here. More on those later!