Gifts of the Intuitive Theorist: My New Book for INTJs 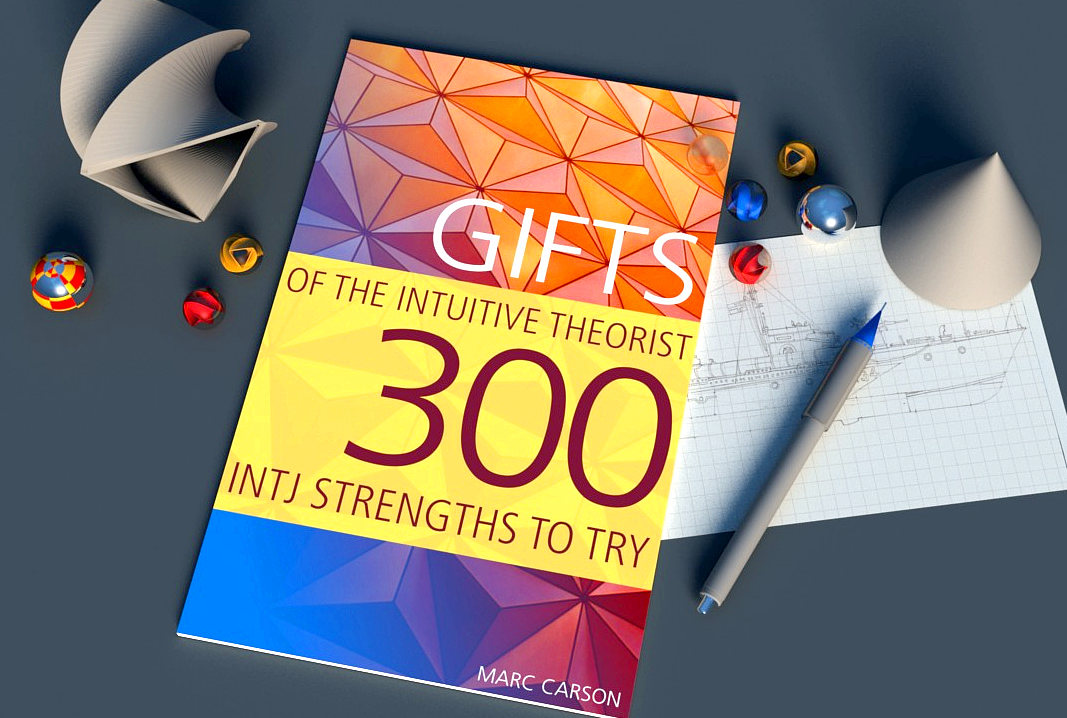 Departing a bit from the typical long-form self-improvement book, Gifts of the Intuitive Theorist: 300 INTJ Strengths to Try is a book of creative exercises. It’s packed with opportunities to dive in and explore various INTJ strengths—some of which you probably haven’t tried before. Learn a new fact or two, or develop a completely new set of skills. You decide!

You’ll probably like this book, or so my early INTJ reviewers say. Purchasers receive both a DRM-free PDF and EPUB copy of the book. There’s a PDF with sample exercises available, and here is the purchase link.

While I’m getting the book launched you can use the promo code “launchpromo” at checkout and pay $6.99 instead of $7.99. This won’t be permanent, so grab it while you can.

If you read it, I’d love to hear what you think!

Because the book is one large set of exercises, I started out by identifying the kind of language prompts I wanted to use, then I put together a Perl script to generate a framework of the book for me (notice I didn’t say “write the book for me”). I fed different ideas into the script, which eventually generated 300 really generic sentences, which I then molded into exercises. Then I deleted some and added some more.

I have revised each exercise an average of 4-5 times. If you read the sample PDF you can see an example where I work through an exercise until my brain is really well stimulated and I’ve gained some new insights.

The book cover is decorated in architecture which incorporates triangles: The Epcot Center Spaceship Earth geosphere. In reviewing my own doodle and sketch imagery, the triangle appears over and over. It imparts a sense of directional force and strength of structure in one object. As such, the triangle has a lot to do with INTJ psychology. INTJs love to create and develop (usually mental) structures with which to exert force! Building on this, I decided to find a way to combine triangles and architecture (architecture in the general sense is an INTJ strength) in the cover.

The image above is a 3D render of the book and some accompanying objects, including a pencil drawing I made some time ago. 3D modeling is absolutely my jam when I need to put a quick product shot together. Alternate angle one and alternate angle two. I used a software package called Art of Illusion which I’ve been using since around 2003. It’s limited in some ways compared to the commercial software I’ve used, but a lot of fun for simple projects. Using FOSS like Art of Illusion for production artwork in 2018 feels a bit like drawing the Mona Lisa with a ballpoint pen, which I’d probably enjoy doing anyway.

P.S.: If you’d like to be included on my list of early reviewers for future titles, my email’s in the sidebar.

< Previous: Some Notes and Tips on Productivity Exhaustion  ·  Next: INTJ Tips for Working and Living with INFPs >

Hi, I’m Marc Carson. This my psychology blog, where I write about personality type theory, typology, and type development for INTJs. I focus mainly on the INTJ personality type, though a lot of people of various types visit to learn about their INTJ friends and family members.

Aside from owning a website development business, I also own Marc Carson Coaching, where I specialize in coaching tech professionals.

I have been professionally certified in the assessment of psychological type and administration of restricted psychometric instruments, and am a member of APTi. I have given presentations on personality type to large and small audiences.

INTJs Randomly Mentioned in ZDNet Tech Interview: COBOL turns 60  I could hardly believe my ears! The author gets into the INTJ topic at about 4 minutes in.