The Mad Max Diet for Girls

Here’s an update on my INTJ-psychology-oriented diet.

As of this morning, I’m down to 205.5 lbs, bringing the 4-day total to 5.5 pounds lost. And I’ve got a strong feeling that I’m now drilling into the post-water-weight bedrock. The real grind begins.

Pushing it Pretty Hard, Can I Maintain this Rate?

I’m on an extremely heavy cut, compared to my average. Just as a guess, this would probably be about 2.5 lbs. a week worth of lost weight if I keep on the same track, and that’s risky for me. I remember doing this before. Sometimes I win, sometimes I don’t. So I’m paying attention to that.

But wow, to imagine hitting my 203 lb. milepost goal just over a week from now! Whoa. That would be so epic. After that, the final goal of 195 or even the stretch goal of 189 would just be a matter of weeks…hmmmmmmmmmm. Maybe maintain.

But all this dieting takes a psychological toll; it’s not just about punching numbers in and pretending to be a robot. I’m a seriously flawed human, and one heck of a dynamic system, with various stressors and perceptions and so on. So I’m going to stay open to new ideas and processes. Some of which are going to be very intuition-driven.

And, one of which is…

As a quick note, I use the word “Girls” in the title NOT to poke fun at girls. Girls can kick all kinds of ass. What I’m talking about are the effeminate parts of all of us—boy, girl, lumberjack, whatever.

During this cut I’m intentionally drawing heavily on effeminate archetypes from the subconscious as a way of lowering risk.

I’ll probably write more about this later, but I’m being extremely gentle with myself and staying open to feedback that says, “I’m working too hard, I need a break, let’s put on some nice music, how about a nap, let’s feel pleasant again. Do I want to take a nice long shower? How about putting on a favorite TV show?”

If you haven’t explored this before, haven’t tried it, harness the INTJ hidden openness strength (you have to decide consciously to do so) and give it a shot. Imagine yourself letting in an effeminate archetype, in your imagination, and see who manifests. Ask them what they want.

I had a pretty funny archetype emerge in my subconscious and I’m SO GLAD I met up with her and talked to her. She was SO SWEET and also overweight and pretty ashamed to be herself, but the fact is, she must be accounted for or she will destroy my ego. I have been down that road before and ended up eating way more than I knew I should. It was not cool and she was totally out of control.

So for now, she’s in there and I’m taking care of her.

One thing she appreciates is all of my spare contingency calories. She will use them up in no time. So I try to make sure I leave some in there every day, but again I’m also taking care of her in general to make sure I don’t overeat.

Just pulling up huge swaths of random dictionary words to see what intuitively stands out:

Psychologically I’m pretty much in masculine overdrive. The Mad Max Diet! Yikes. There’s a resonant image for sure.

I’d better take care of myself. This much overall risk plus a vague feeling of plateau at “only” losing 0.5 lbs. in a day is hard on the mind.

The Food: My Weight-loss Diet

This is one of my favorite parts. I love to imagine that I’m Ronnie Coleman and WHERE IS MY CHICKEN.

My diet in terms of the food I’m eating is back in familiar territory which I remember from previous cuts. Overall it’s something like:

I guess I would also add salsa to that. It’s practically a separate food group when I’m dieting. Sit me in front of some vegetables and salsa and I’ll happily eat until I’m overfull.

Here’s 1/2 of today’s lunch salad (it was huge, and I forgot to take a photo of course), and some fresh bakery bread on which I happily spent some of my contingency calories. The salad is a store-bought “asian” salad, to which I’ve added peanuts, curry powder, salt, tons of pepper, some red cayenne pepper (there was already a little in the dressing so this made it taste AMAZING). I used about a tablespoon of the included dressing. This made the salad a tiny bit dry, and sometimes even just sprinkling on a bit of water can help out these bagged, store-bought salad mixes. 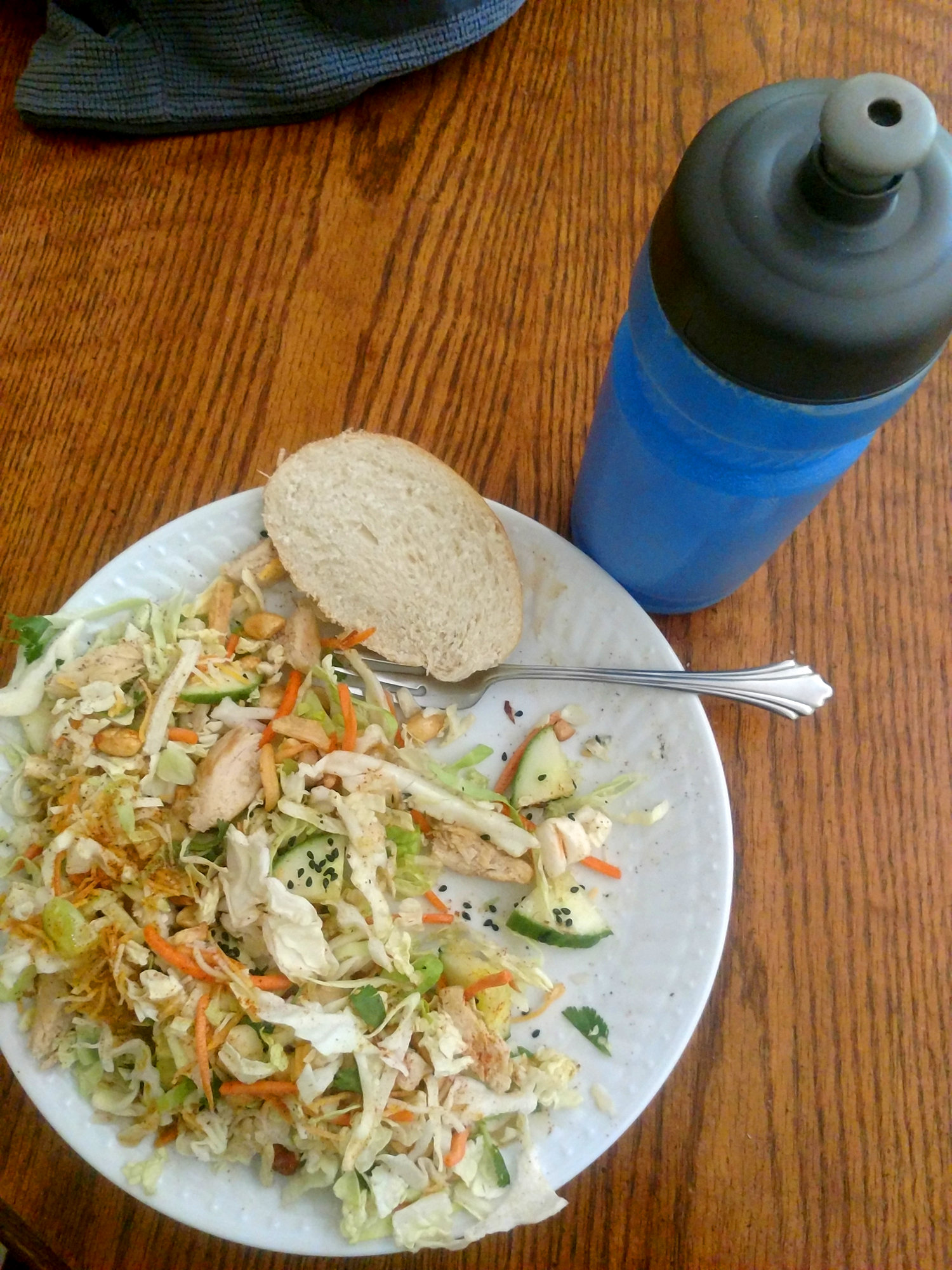 The salad was around 600 calories total. Given the amount of bulk, I’m very happy with this. Also it tasted AMAZING OMG I WANT TO SCREAM, as does just about everything new, when I’m on a diet.

The drink above is a zero-calorie sweetened single-serving drink, I think some random Hawaiian Punch flavor. These are really nice for making hydration more attractive, and they also help in “other digestive ways” when on a high-protein diet.

Reviewing my notes from my last big cut, I remembered that I was able to feel full a lot of the time by eating cauliflower, pickles, and so on. I’m probably going to start throwing those in too.

Ketosis mouth taste also is my near constant companion. It’s a sweet taste but what I’m doing to my body also feels bitter in a way. So the taste in my mouth kind of averages out to “weird, but if you don’t taste this, you might be off track.”

Again, I’m in this 1400-1700 calorie-per-day area and it’s working well. THESE NUMBERS ARE JUST FOR ME and my condition though. Always check with a doctor or diet professional before drastically cutting calories.

I’m also going on long walks and doing some light hiking. Before I leave, I hydrate. While I’m out there, I hydrate (at least 8-9 gulps from a drinking fountain). When I get home, I hydrate. This seems to help to keep my mood up, my blood pressure up, and there’s less of a bonk when I return home.

When I do get home, I make sure to set aside time to just be a lazy guy. Zero productivity unless I’m in the mood. Gradually I’ll return to equilibrium in that way, but for now I’m going to be really immature and sloth-like.

I’m aiming for 8 hours of sleep a night as measured on my fitbit, plus a nap when I can fit it in.

The nice thing about naps is that you generally are not thinking about food while napping. Though I did dream about eating two beautiful pizzas last night. :-)

What about the Extraversion?

The “Extraversion Method” that has me posting updates here really has been helpful. It’s a benign, positive pressure but it’s definitely a performance pressure that is pushing me toward putting on a good show here. So: Recommended!

It’s getting serious now. My clothes fit better after losing 5.5 pounds from 211 to 205.5, which is great. But I’ve got a hard road ahead—let’s see how it goes.

And my usual disclaimer: This will never work, it’ll fail, I’m not up to the task, I will slip up somehow, etc. Gotta get that out!

Own your procrastination with Whole Productivity, a new system → Get my free INTJ COVID-19 Guide → Explore your gifts with my INTJ Workbook → Other Publications → ...and the fake word of the hour: "Wilkap." I think this is related to disgusting smells.