The Great Video Desktop Experiment of 2020

Over the weekend I set up a video wall on my extra monitor. Six movies/TV shows/other random videos are always playing. (What’s random mean? Well, somehow a really boring corporate video from one of my clients got in there, because the software behind the scenes is looking for videos ALL over the place. Still, it was kinda cool—I didn’t realize I had one of them fancy corporate video walls…)

It’s backed by a script (work in progress) that prepares big random playlists and then opens VLC windows playing those playlists. 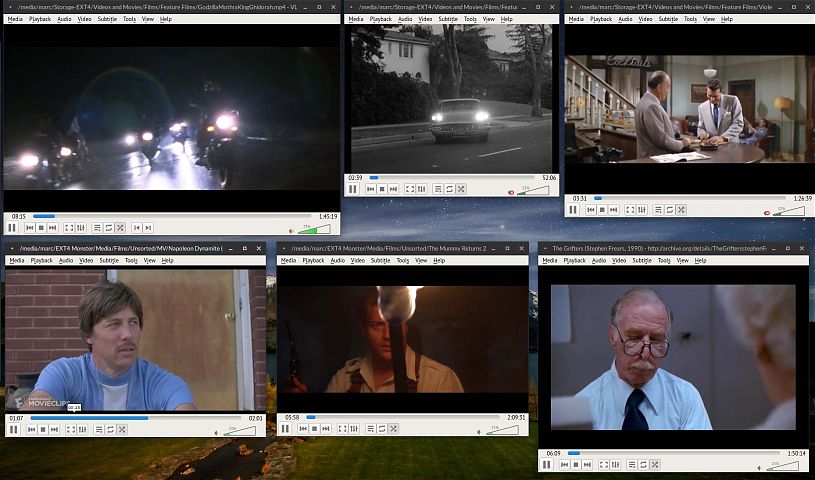 I tried to get a bit fancy but we’re still stuck at version 0.1 for now. VLC seems to have this “new version? Maybe this feature works, maybe it doesn’t” reputation, on which I’m blaming the fact that I couldn’t get RSS overlays to work. But even without RSS feeds showing up on top of my videos, I guess there’s always something interesting goin’ on.

So far it’s worked great. Early this morning I worked really hard for a couple hours, accompanied in part by this lovely BBC Testcard. Something about the ESFP-style wackiness and novelty of it all was motivating.

My use pattern so far is like this: I keep one window at about 70% volume, and about 10% larger than the other windows. Then I keep another two windows at ~20-30% volume, and the rest are muted. If anything, in any window, is boring, I hit the “next track” button in that window. Sometimes I pause things when I run into the house for a bathroom break, because the current set of videos is just too good.

I also bound “Open a random movie in a VLC window” to a keyboard shortcut, Ctrl+Super+7. Kinda handy.

Ideas for future improvements include:

The main idea here is novelty, freshness, and frequent change-ups.

BUT could an INTJ shoot this idea down with that natural eye for everything that’s wrong with stuff?

So I thought I’d edit this to include an INTJ friend’s reaction:

I’m perspiring just from reading that.

Yeah, a few notes: First, you definitely can’t pay attention to all the videos that are playing. You have to isolate the one that you like, and then kind of peek over at the others that are playing and anticipate watching them sometime later. (This isolation, by the way, tends to be a favorite activity of the INTJ brain.)

Second, this is an experiment in free energy via sensory stimulation. Like, something motivating and resonant randomly starts playing, and you get the FREE REALESTATE err… free energy from feeling like I LOVE THIS MOVIE or I’M TOTALLY IN THIS MOOD or whatever. Then this opens an emotional door to kicking butt while working through the to-do list and watching a fun movie or TV show or jamming out to a BBC test card.

Think of yourself as having this windmill attached to your brain, but there’s never any wind unless you decide to break out of your solitude and turn on some new music or go for a run, or whatever. In this case we’re actively trying to create wind for the windmill as a background process, and we’re also binding that wind-creation background process to a keyboard shortcut. In this way it becomes easier to randomly trigger good vibes.

Third—of course I mute the whole wall sometimes, or otherwise moderate the master volume, like when things get intense at work. Like anybody would do. It was never really envisioned as an always-on, loud audio stream, but who knows, maybe there’s something to that which could be isolated…hmm….

Some Frameworks I Haven't Updated Lately, and Why →
White Guy Speaks INTJ in Local Market, Locals Stunned →
Coaching Update, and Some Tips on Finding A Good Coach →
I never thought I needed change, but it makes me proud to say →
A List of Some Extroverted Activities →

Own your procrastination with Whole Productivity, a new system → Get my free INTJ COVID-19 Guide → Explore your gifts with my INTJ Workbook → Other Publications → ...and the fake word of the hour: "Mirap." I think this is related to party games.