My wife could tell you I’m pretty hung up on appearances lately. I keep sending her photos and screenshots of people of various personality types.

“Doesn’t Person A look SO MUCH like Person B?” I’ll ask. “Do you want to see the Youtube video? Here is the link!”

“Wow, yeah! SO fascinating,” she’ll reply. I’m never sure exactly how fascinated she is, but I’m 99% sure this is legitimate fascination. :-)

Anyway, I know I am fascinated by this and so I’m going to continue down this path. And heck, I probably couldn’t stop even if I wanted to. And exactly how would you stop the INTJ’s dominant mode of perception from working? And why would you even want to do that?! Anyway. It just does its own thing.

So I feel like I’m hot on the trail of a couple different ESFP appearance-connections, with groups of people for evidence. Same with INTJ, INTP, INFP, ISFP, ENFJ, and ENFP.

Dammit, give us something to work with here 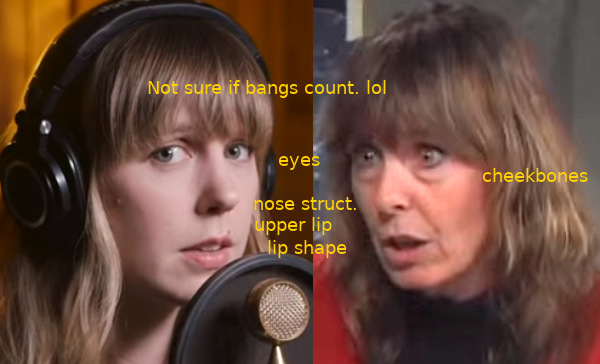 Oh and I just remembered that my mom looks a lot like Elaine Perliss, too. lol. Will have to dig up photos. I don’t need her permission because she’ll take it all in stride ;-)

BTW I lightened Elaine’s face with the levels tool, but mostly because the video is so dark that I wanted to make it easier to see for people who have darkened their screens. (Do you guys do that? I darken my screens quite often, but my eyes tend to get really dry. But INTJs tend to be sensitive to little things like that too.)

This one is funny because I sent Elaine’s photo to my wife and together we quickly named four other ESFPs that resemble her. Personal friends, sadly. Maybe they’ll allow me to take photos? They are ESFPs, after all. Anyway, it was just a moment about which I knew I’d be blogging soon. 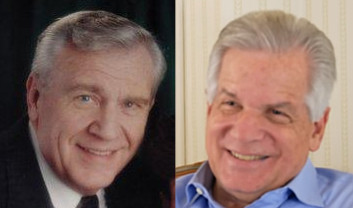 You can see the video where I got Greg’s photo, here.

Two Mormon dentists, both INTJs, AND they both look alike. Jesus Horatio Christ, with apologies to my more orthodox Mormon friends. I wonder what the f*** would happen if they were in the same room together?! Instant best friends? One of those “separated at birth” news spots on CNN? Or something a bit more X-Files?

Unfortunately, my dad’s long gone. But beyond the photo comparison, these two people also share a certain intensity to their communications. Watch Greg Prince for a while and it seems like he’s constantly acting as if his crazy-deep historical insights are as clear as day and you’d be dumb not to think so, too. My dad could be like that. See? 1 + 1 = 5! Chin down, eyebrows up, “you’d better believe it!”

I showed the photo to my ESFP mom, who looks like Elaine above, and who said, in true ESFP form:

Yes, there’s a great resemblance! Dad tied for 1st place in the National Written Dental test. Received A+ on the 9 piece bridge he completed at U of W. The largest bridge work ever done at U of W.

The largest! The best! Great! Woo hoo! Gotta love that Se. But yeah, these guys are no nitwits! The INTJ look of champions!

Photos kind of sell it short

One problem I’m facing is this beyond-skin-deep aspect. These similarities are not all still-frame photo similarities. In fact, still photos really sell the effect short, if that’s all you’re comparing. In this case, yeah, probably you’re not going to find video examples of Nataly and Elaine interacting with others using even roughly similar levels of intensity. (Wouldn’t we love to see Elaine rocking out, and Nataly teaching hypnotherapy though? We would.)

But when you do experience that sort of thing, say when you’re talking to someone in real life and realize how much they resemble another person at this deep and really solid core level that runs through their entire being, it’s really weird and cool.

So I guess what I’m saying is that there’s a psycho-sensory similarity, in a way. If you can take in the experience of that person, including their mannerisms, preferred means of perceiving and judging, AND their overall appearance, you can get a better idea of what I’m talking about.

And that kind of leads to the most annoying part. As always. This needs to be organized somehow. I’ve got a new theory in the works here—possibly; I don’t want to inflate my gigantic ego too soon—but now I need to organize all this “stuff”. Which takes judgment, and as perceptive-dominant types, us INTJs, well sometimes it’s just easier to think about stuff. To just sit around and be fascinated—great. But people these days, they want things to be done. Evidences provided. Youtube channels created. Blog posts to be regularly published.

Oh yeah and another weird thing

I’ve also noticed some striking similarities between opposite types. I know some of you might think, “you probably confused opposite types” but we’re talking about ISFJ-A and ENTP-A, for example. Not super easy to confuse. And man, the visual similarities. Really obvious stuff.

Well, let’s see how it goes.

This feels a bit like a setup for some niche and unintentionally-ironic oriental diagnosis type thing in a way, but I do entertain a faint hope of overcoming some of the shortcomings of such a possibly-comparatively-limited model. I’ve seen and podcasted about some other models for this kind of thing as well, though there isn’t much meat to them that I’ve seen so far.

I am pretty creeped out to think I’m going to find some INTJ out there who looks like me. If it’s you and you want to get in touch though, don’t hesitate. We will freak people out together, and it will be glorious, I promise.

By the way, my “INTJ Sub-types” model made the rounds in beta form recently, and the feedback was good. I need to polish it up a bit but I’ll publish it soon.

Own your procrastination with Whole Productivity, a new system → Get my free INTJ COVID-19 Guide → Explore your gifts with my INTJ Workbook → Other Publications → ...and the fake word of the hour: "Liber." Which I believe is a term used when speaking about runny noses.

< Previous: Alas, Poor Trebek  ·  Next: Learning the language; of people >