Here are some new cognitive function extensions I’ve been working on. The latest version is also symbolic: 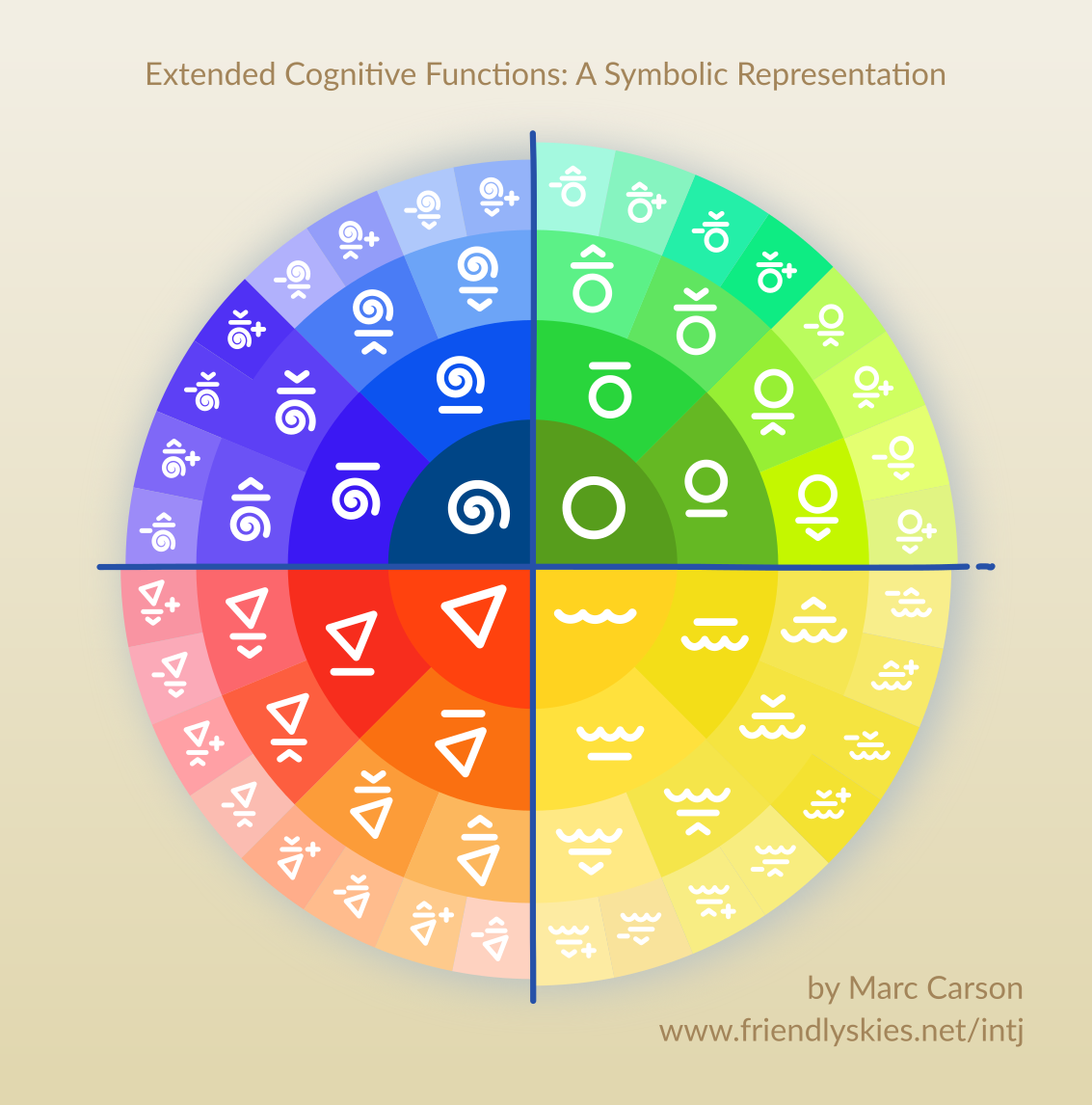 This model helps to catalog the cognitive functionality that anyone can access. It’s not really about what “type” you are, though it can help you transition from standard personality type to knowing yourself even better.

The four symbols are:

The carat symbol indicates whether information is being directed / organized / created (upward arrow) or observed / taken in (downward arrow).

The plus and minus indicate more about the nature of the use of the function (more below).

Here’s the older version of the graphic, with the letters, for ease of reference: 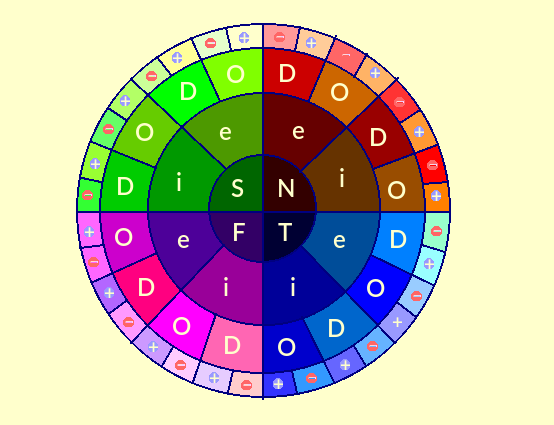 In terms of presentation this is really rough so far, but that’s mostly because it’s a fairly detailed model and it’s still first steps here.

There are two new letter suffixes:

In this model, “Judging” functions T and F can be used for perception, and “Perceiving” functions N and S can be used in judgment (directive) tasks. I feel this more accurately describes the use of these functions in normal conversation.

There are also two other suffixes, the plus and minus:

Since questions come up a lot in speech and thought, I’ve designated ‘x’ as a question mark substitute (borrowed from Gregg Shorthand). The x is written in lowercase unless it is denoted as subscript, in that case it would be capitalized. Here are question-type-specific notations:

Where is my car? SeO+xr

Why did your friend come so late? TeO-xh

What is the meaning of this black feather on my pillow? SeO-xh

What is the meaning of life? NiO+xp

What could life possibly mean? NeO+xp

I went by mom’s house today and found this old cassette recorder. I think it will fit our plans perfectly. Do you like it? SiO+ —> SeO+ —> NiO+ —> FiO+xh

There is a lot of room for argument as to which functions are used here. I think of this as more of a Lego-like language, or a language for inspiring more questions about people, instead of a precise replication language. So you could even simply say that the example here concerns an issue of NiD+xp, or what we ought to do to achieve a future outcome. But it would be even better to actually ask the subject about that—to what degree does that conclusion seem true to the subject?

I’d rather use the terms to ask questions or stimulate thinking, than to delineate sides in an argument. Each viewpoint may have its own unique leverage. Hold your models lightly…

Below I’ve written up the entire group, providing examples where possible:

Note: This model does include plus and minus, which I think I’ve mentioned before are also used in at least one Socionics model, but the use there has varying characteristics and I am treating my pluses and minuses here as distinct. Kind of like the way the letters can mean different things depending on the model, even if the models use the same letters.

Own your procrastination with Whole Productivity, a new system → Get my free INTJ COVID-19 Guide → Explore your gifts with my INTJ Workbook → Other Publications → ...and the fake word of the hour: "Wilkap." I think this is related to disgusting smells.

< Previous: That Ain't Hobby Money  ·  Next: Why Closing Tabs is So Hard >