My crummy paint job on an Italian couple's bedroom wall 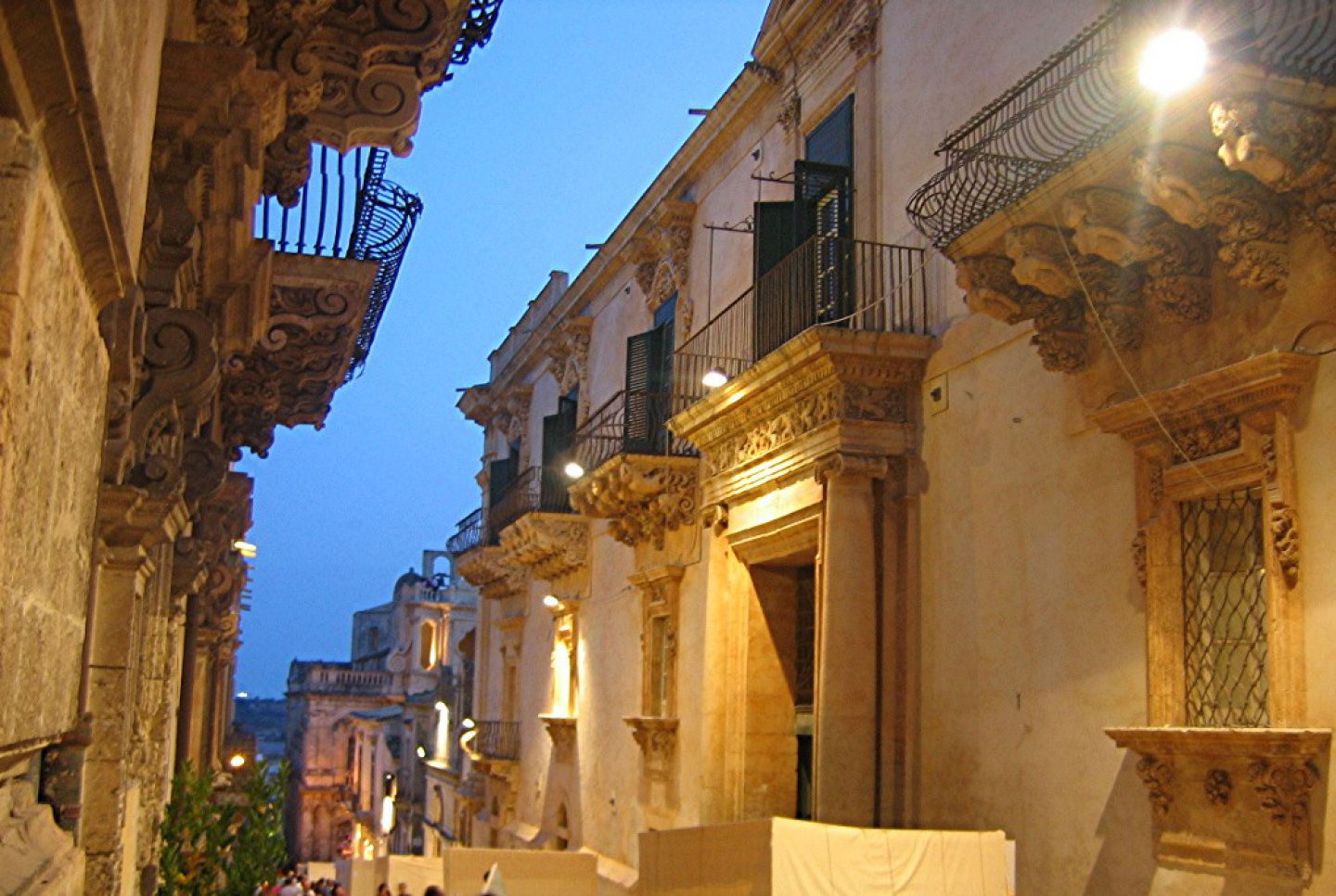 Above: Avenue in Noto, Sicily

In a small home at the end of a quaint little paved path in the city of Noto, Sicily, there is a master bedroom wall with my painted hand-lettering all over it. Or it had my lettering all over it. I really hope the writing is gone by now, but I go through these terribly blunt, logical, panic attacks that periodically burn their way through my mental filter to tell me the writing is probably still there.

Some background: In 2009 I traveled to Sicily with my wife, Megan, to attend the wedding of one of her Italian friends. I’ve mentioned before that I don’t travel well. This trip certainly verified that hunch. For example: In an astounding lack of judgment just three hours before boarding the plane to fly from San Francisco to London, I ate a large bowl of chili con carne and two pieces of whole wheat toast. What was I thinking?

Actually, I can offer some context for that. The entire morning I had starved myself fretting over the various things to pack for this latest big trip. Money belt: Check. Khaki pants: Check. Blue dress shirt I bought on a whim: Check. Zipping up my suitcase, I saw the “Dockers” tag on the back of my khakis, and realized I was going to Italy dressed like a caricature of an American tourist circa 1998. I knew I would stand out because I had just done a Google Image search for “italian men dress fashion” and then “italian men standard clothing” and then “italian men street clothing” and then “italian men slobby clothes” but they all showed me the same thing: These people care about their clothing in the same way that I, for example, care about how my teeth feel after I floss them for a week straight.

Starved and already depressed, I decided that my clothing situation wasn’t going to improve much without pulling more trip budget out of nowhere. Food would probably make me feel better. And it did, until about 10 minutes into my trans-world flight during which I stepped over about 200 pairs of knees, speaking cumulatively.

To say that idiotic eating decision helped make this trip awkward wouldn’t even begin to suffice. Have you ever had an Italian mamma walk in on a room full of your drying underwear before? Have you ever tried to offer a Sicilian a knife as a gift before? If not, I submit that you have not plumbed the depths of what international travel has to offer.

Far above everything else that happened, though, the wall writing episode has the staying power to keep me up nights.

Let’s use our talents

“She says the girl who started it won’t be able to finish it,” Megan told me, translating her friend’s Italian. We were both staring at a master bedroom wall covered with pencil marks, an awkward semi-calligraphic scrawl. Lower down, pulled away from the wall to give us room to work, sat an immaculately pinned-up (as in pinned-up sheets) matrimonial bed—one of the traditions for the wedding day.

Apparently it’s also customary to write on the newlyweds’ bedroom wall (I’m too lazy to google it; knock yourself out): A quote, a scripture, some type of verse. From what I could tell, this was to be about four pages of the Old Testament. Maybe it was really four verses. But it was a lot of text.

My handwriting isn’t bad. I’ve never taken a calligraphy class, but I’ve self-studied a bit from several of those calligraphy kits you find at the bargain table of a mega-bookstore. As a result I’m no expert by an extremely long stretch, and I know what it looks like to get calligraphy terribly, ridiculously wrong.

Looking around the room, I could tell by the “not me” expressions on everyone’s faces that I would have to give in. Word had already spread that I was some sort of artist. Tall, husky american artist in Dockers, nothing like our homegrown guys, but he could probably do it with no sweat.

Megan’s friend handed me a Crayola brush—the type used by schoolchildren everywhere, apparently—and pointed at some crimson paint. There was also a pencil, should I desire to add my own little flourishes to what was already done.

Heck yes I was going to add flourishes. Mostly with the eraser. Suddenly this was a serious project. Maybe I could—maybe I really could pull this off! That’d be cool, wouldn’t it? To say it, to tell someone, “I hand-lettered the wall above a matrimonial bed in Sicily!”

Yes, I hand-lettered the wall above a matrimonial bed in Sicily. And I panic every time I think about it.

It turned out that the groom’s father was an excellent penman. I saw some of his writing on a card for the newly betrothed. It was amazing, like something from a veteran certificate writer, circa 1920. As we all toured the house later in the day, I saw his eyes meet my painted lettering. I read the message in those eyes. It said, “you aren’t fooling me. Now my son has to raise a family under this massacred verse.”

So I knew my calligraphy wasn’t any good. I wanted to go home. Or just back to the springy hide-a-bed at the cousin’s house where we stayed. There was a fountain outside. It trickled all day and you could drink from it. Murals on the walls, scooters breaking the silence and zipping past every few minutes. Sigh.

But all that darn writing on their wall, with a Crayola brush, next to their immaculate modern furniture. Drives me nuts.

I won’t forget it soon. I don’t know where in the world we’ll travel next, and I’m not sure what I may be asked to do while we’re there. But if I can just get over this lettering project, just learn to live with it, maybe I’ll have enough room for another awkward travel experience.