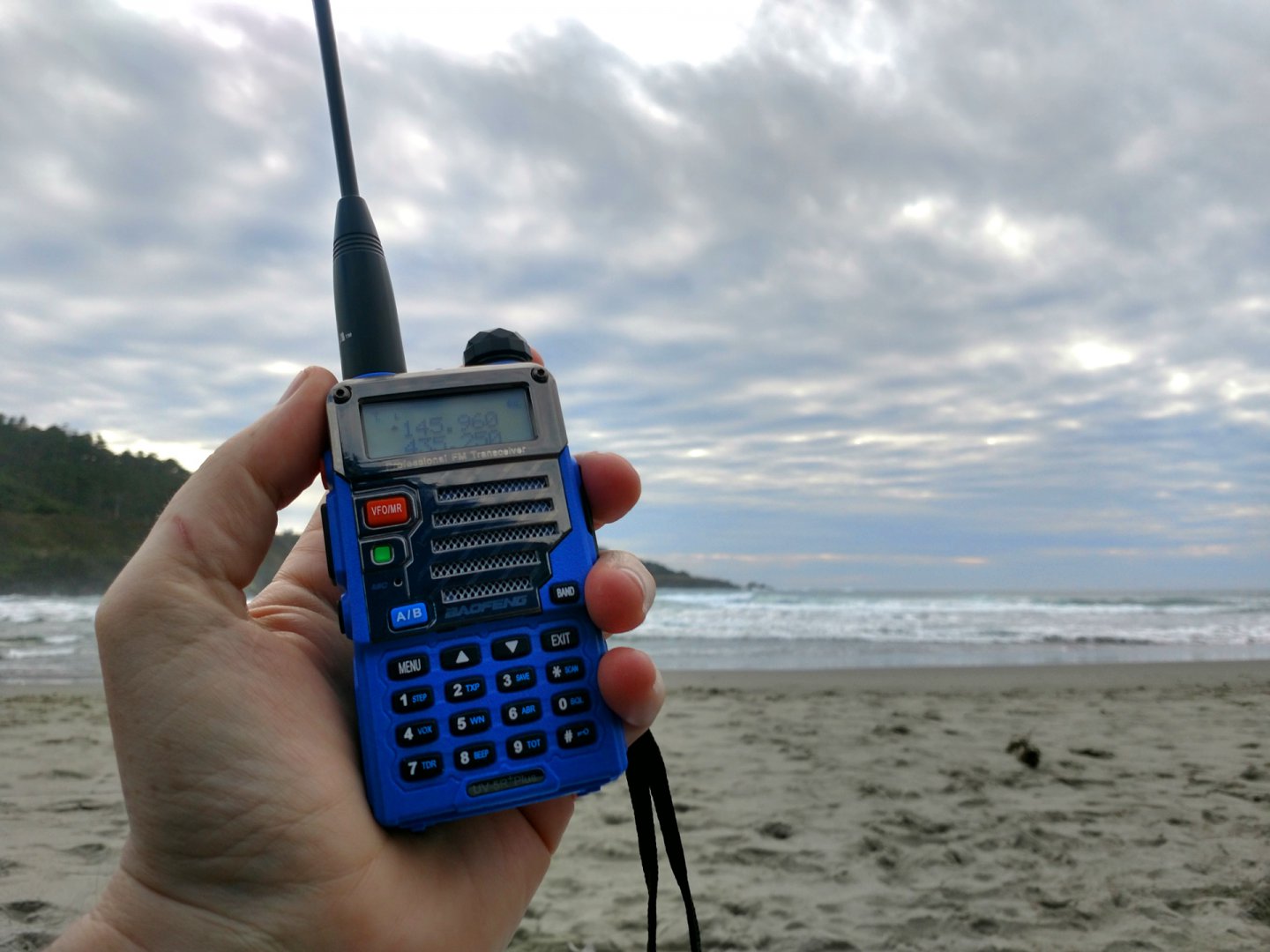 I’m a brand new ham as of October 2017, and I had a really fun experience listening to RadFxSat Fox-1B AO-91 yesterday. Here’s how that went, in case anybody else wants to listen in, and maybe try to transmit—on their Baofeng handheld.

Please note that you will need a ham radio license in order to transmit to this satellite legally.

Getting the timing right

I used an app called ISS Detector Satellite Tracker from the Google Play Store. This app is really impressive. You have to pay for amateur satellite information, but I think I paid about $3 USD total and in my book, that’s a really good deal for what you get. 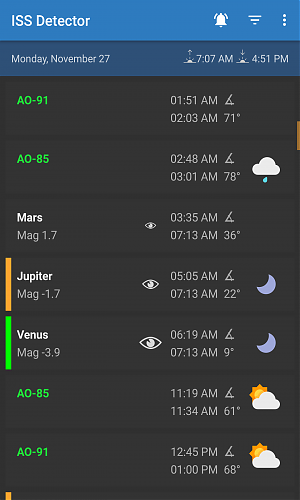 The app alerts me five minutes before a pass is about to begin. I can also look at the main screen (see screenshot about) to view the next few days’ worth of satellite and ISS passes. This includes the satellite elevation and weather, which are important factors. If the satellite is at a low elevation, it will probably be blocked by the valley sides where I live, so I told the app only to show a pass when it is going to happen at 40 degrees or higher in the sky.

I am using a Baofeng UV-5R+Plus handheld with a Nagoya NA-771 antenna. You can use any Baofeng dual-band handheld for this. I recommend the antenna upgrade—be sure to look around for the best price. I think I paid around $40 all in, plus $15 for my ham license, so at $55 this is extremely cheap fun with technology.

To get my radio ready, I had to set up the following frequencies. I switched my Baofeng into VFO mode and typed the AO-91 satellite downlink receive frequency into the top line on the screen:

The radio also has a squelch setting that it’s best to leave off, so that you can make out weak signals without the radio completely blanking them out. I pressed MENU then 0 then MENU and hit the arrow buttons until SQL was set to off. Then to save the settings, I pressed MENU again and then EXIT.

Now you should be hearing noise from your receiver. Perfect! I keep the volume low until the satellite starts its pass.

Next I pressed A/B to switch to the second line on the display, and typed in the transmit frequency:

In order to transmit (talk to the others using the satellite), I had to add some extra information about that channel: The uplink tone.

Great, now the radio was alive with noise, ready to transmit, and the satellite was about to arrive.

This is where I did a little dance, waving the radio around to see if different positions would help me pick up its signal.

How it went down

Here’s a clip of what I heard, standing on beautiful Big River Beach in Mendocino, California. This has not been edited, so you can hear how suddenly communications seem to come in and out.

When the pass began, the noise was interrupted a few times by a very clear signal. It was really exciting to suddenly hear other radio operators absolutely speed-talking their way through communications with distant stations. I would recommend this to anybody!

In order to transmit I had to press the A/B button before holding down the Push-to-Talk (PTT) button. Because the Baofeng is not a full-duplex radio, you can’t listen and talk to the satellite at the same time. So I pressed A/B, called up to the satellite, and then pressed A/B again to listen. Nothing! Well, like I said, it’s a very busy satellite right now.

In the future, here’s what I’d like to do:

The specific model of Baofeng doesn’t matter much for satellite work. As long as your radio is dual-band capable, you’ll be good to go.

I have found a new hobby within a hobby. I don’t have tons of time, and this is a really fun little diversion that is guaranteed to last no longer than about 15 minutes per episode.

If you decide to give AMSAT a try, let me know how it goes! I’m @systematikk on Twitter. —Marc KM6NHH

Next: WebSDR Listening For… »