Various Lately Things: MilkyTracker, Text Editors, Something Else I Forgot

A couple nights ago I started transcribing the bass part from Gamesofluck into MilkyTracker. Not sure what the hell I’m up to, really. Anyway, it was a lot of fun. MilkyTracker is part of the module-tracker family of music software, which is part of my heritage as a C64, Amiga, and MS-DOS demoscene fan.

I thought a lot about how this cover version of Gamesofluck would sound when I was done. I could try something chippy and fun but still hard, something retro and inspiring but also artsy, which is even harder, or something chippy and amazing but extremely detail-oriented. But then I remembered—the more I try to conceptually tie off all the sensory details from square one, usually the astoundingly more difficult the result.

I often have little bouts of creative musical energy (yes, you just heard Marc Carson, Plastic Yamaha Alto Recorder Soloist on that tune) and they’re fun. Little sketches. Good for life relief. Back when I made musics as a professionals (WAY back), I remember struggling to maintain interest in projects after a while. I had to make sure I felt every single note or I was screwed. Might as well be phoning it in.

It took a lot of energy to make music for other people, and that was really frustrating: Did I do it for myself? If so, it often became a portfolio piece. Did I do it for someone else? Uh…a completely different slog. Embarrass. Throw way now. Since then I’ve learned some ways to work around that, like taking a design-first approach, and getting to know the psychology of those involved in a music project, as part of a learning process that can really ignite the outcome. But it’s hard to reconcile the “what’s happening” with “what I anticipated would happen” when your own life-system seems to be subverting you for unknown reasons.

It’s also really depressing in those tired moments that none of this is any kind of excuse for why I feel as if I totally want to get a band like Parcels, but cannot yet speak their sensory-emotive language. You know? They just spoke to me in bass, guitar, FM radio, drums, and keys. So here, hand me those, I’m composing a message back. No—no, I don’t know any of this stuff. Except FM radio, but don’t even know how or why they are tuning it the way they are, ergo no, I’m not an FM radio performance artist.

That part is really terrible. (What a depressing lens on life, Marc. Geez.)

Meanwhile, I’ll bet that if you met a band member and said, “ah, I am really good with Microsoft Excel,” they’d say “f*** man, well much respect, that’s way out of my box,” and there’s a real chance that both of you would be standing there quite confused about your own life choices. Even though EACH of you thinks the other is also pretty impressive to an unreachable degree.

Speaking of Microsoft Excel, I really enjoy creating little spreadsheets and graphs in text format these days. I made a graph out of text symbols recently, charting the temperature in my office: 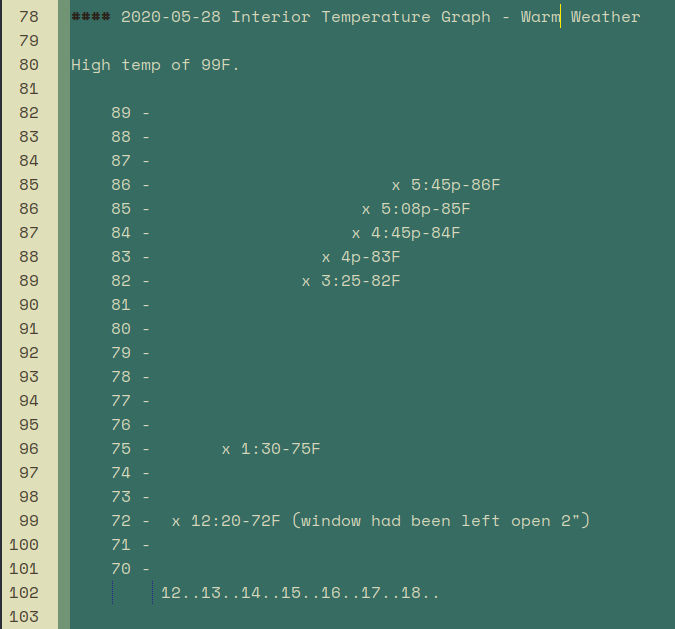 Why is it so weird to say Geany? Cheany. Oh.

I’ve mentioned before that I really enjoy using Geany and this holds true. My version has zero buttons in the interface, just menu items, 150 or so document tabs, and the current document. I use the Commander plugin mapped to Ctrl+Shift+J to switch to commonly-referenced files. I’ve also got some global keyboard shortcuts which map to external tools that help me find and quickly edit files.

Geany looks really simple, but I’m continually surprised by its depth. Just when I think I know it pretty well, I find some other feature, tip, or workaround.

Be that as it may, I enjoy trying new software and get some energy benefits from new discoveries in this area. So lately I’ve also looked into TextAdept and CudaText.

TextAdept has a really good rep. You can do all this crazy extensible and easy stuff with Lua, or so I’ve heard. You can Lua over here, Lua over there, Lua up in here, shake your derriere. People who write about it are like:

To scratch the surface of how extendable this program is, I’ll give you a few examples:

…and then you can read all about how this text editor is really going to give modern physics a run for its money, or whatever.

The only thing that’s driving me crazy is that somehow, on my system, the various menu items don’t have horizontal separators. Maybe I’m meant to script those in on my own, but I have learned that I like it when menu items have little visual separators, grouping related tasks.

I also looked around the menus for things like “CLICK HERE TO CHANGE COLOR SCHEME” (I was begging for something to say literally this, by the end of my menu-browsing experience). It seems I’m meant to do this kind of thing in a configuration file. Maybe Lua scripting makes this super easy, and I shouldn’t sweat it. But I was kind of sweating it.

As a result, I ended the session. Still, I want to get up to x2 before I start to solidify the way I think about the app as a whole.

CudaText is neat for me because it has ties directly to my past: It’s written in Pascal, of which I have some fond memories from my youth. Mostly, I watched other people do neat things with the language. So Pascal is in my “mechanical pencils, graph paper, calculators, oh and Pascal” box. Things I don’t use terribly often, but really want to make time for, like one would make time for a romantic date and oh my god this is embarrassing.

There’s a nice video on CudaText and apparently TextAdept speaks for itself through pure musical emotion. Or I guess you could immediately go behind the scenes with Michell and his frankly amazing hair. Hm, there’s no real TextAdept middle ground on Youtube…

I also like Nim and noticed a pretty sweet-looking editor written in Nim, called Moe.

You see? Funny animation editor. This can be taken in many ways, but: Thank you. We need more of these. Did you see the pizza? I’m all in.

I woke up and stayed up for a couple hours one night (morning?) last month, from about 4 a.m. to 6 a.m., visualizing a text editor I could write. It would have an “About” dialog where you could play different MIDI songs, with karaoke lyrics. And all the lyrics would be about text editing.

We All Must Deploy Our Heroic Perspectives (to Survive) →
Scaling Functional Perspectives of Cognition, Advanced Levels, and Academic Math's A Changin' →
Why Closing Tabs is So Hard →
Cognitive Function Extensions: D,O, Plus, Minus. Take 1. →
That Ain't Hobby Money →

Own your procrastination with Whole Productivity, a new system → Get my free INTJ COVID-19 Guide → Explore your gifts with my INTJ Workbook → Other Publications → ...and the fake word of the hour: "Mirarip." I think this is related to a favorite momnent of loss of consciousness.

< Previous: Napoleon Hill Study Notes  ·  Next: Study Skim: Stress and Coping in Esports and the Influence of Mental Toughness >